Kayaking is a healthy and fun activity.

Surf kayaking is more akin to surfboard surfing than it is to regular kayaking.

The reason is that both aim to ride waves, albeit in different ways.

Instead of standing on a surfboard to ride the wave, surf kayaking makes use of specially designed kayaks and peddles to accomplish the same goal.

What Exactly is Surf Kayaking?

In surf kayaking, your aim is to surf the waves.

So just like board surfers paddle out to the sea using their hands and catch the wave exactly at the right spot to ride, you peddle out using your double-sided kayak paddles and ride the wave.

But that doesn’t mean that the wave will be responsible for propelling your kayak.

While it can (and will) move you up from the surface of the water, the motion of the wave will not bear the sole burden of moving you and your kayak forward.

In this regard, it’s different from whitewater kayaking, since, in whitewater, the down-flowing river does most of the leg work(or in this case, peddle work) in moving your kayak.

Though unlike extreme whitewater scenarios, the paddler doesn’t have to maneuver between rock formations, holes, and other obstacles.

It started out as a sporting event, but recently gained popularity as a recreational activity. Surf kayaking mainly happens in areas where surfboarding is popular.

One of the major reasons for its popularity is that it combines a good mix of recreational fun, sense of adventure, and physical activity.

Unlike some forms of whitewater kayaking, you don’t have to be a seasoned peddler to navigate the ocean waters.

You can start out at just novice, and practice on smaller waves. When you refine your technique and have better control over maneuvering your kayak, you can go for relatively high tide.

Surf Kayaks and Their Types

You can’t get the best out of any activity without the right gear. This is especially true for kayaking. There are several different types of kayaks.

Some are good for kayaking in still lakes, some are well-suited for raging rivers, and some for surfing. There are even kayaks that double as canoes.

All the different types are made for different kayaking needs and water bodies. Similarly, surf kayaks are made essentially for riding surfs.

This makes them very different from sea kayaks, which are lengthy and are more focused on kayaking as an enduring sport rather than speed and maneuverability.

What you have to understand is that in surf kayaking, the water isn’t moving; the wave is.

This is very different from river kayaking where river water is moving and doing the lion’s share in moving the kayak.

The body of a surf kayak is tailored for ocean waves, in a manner much similar to surfboards.

These are fast, short, and agile kayaks. By regulation, they are nine feet or under, usually falling somewhere between seven and nine feet in length.

They are usually equipped with thruster fins like surfboards (typically a three-fin configuration but four fins are also seen).

The presence of the fins allows for sharp turn and twists in the water. This maneuverability is further augmented by the sharp rails.

In high-performance kayaks, the rocker is a bit unevenly distributed, more in the nose, and less in the back, where there is a power pocket tail for faster takeoffs.

These kayaks are a bit more specific about length. They have to be 3 meters (9.8 feet in length), and they can’t have fins.

These restrictions are important as failing to comply with them means that a kayak cannot take part in the relevant surf kayaking event.

They have less rocker than high-performance kayaks. It also has sharp rails, but without fins, these kayaks are not as agile in sharp turns.

They also have a flat pintail, which allows for superior tracking ability in steep sections (and compensates a bit for the fins), but it also means that it requires more energy to take off.

Wave skis are essentially glorified surfboards. They are the only sit-on surf kayak type. They are usually small, 7 to 8 feet in length, and almost always have a fin (or tri-fin configuration).

Since they are sit-on in design, the peddlers have to strap their legs when surfing waves on wave skis. They are almost exactly like surfboards underneath.

On top, they have a sharp nose, footwells, and depressions for proper leg placement and strapping and a power pocket tail like a high-performance surf kayak.

Though they are relatively simpler in design, wave skis are getting more and more popular among surf kayakers.

Surf kayaks are river kayaks that are similar in a lot of cases, size for one. Just like surf kayaks, river kayaks usually have a length of around seven to nine feet.

Both are designed for better maneuverability. Even the paddles used for both are very similar. They are shorter, stronger, and usually feathered, making them easy to break through waves.

But there are some differences as well. River kayaks don’t have fins to aid in maneuverability. The chances of the fin catching on rocks underneath are high.

Also, kayaks specifically made for surfing are usually never plastic. The most commonly used material for surf kayaks is glass composite.

Also, plastic-based whitewater and surf skis are usually built with the weight of the peddler (and gear) in mind and are sometimes limited in this regard.

Also, different types of river kayaks are made for different river types. Play boats, river runners, and creek-ers are very different from each other, and they each have their differences compared to surf kayaks.

Dangers of surf kayaking and how to avoid them?

Every adventure sports have its dangers, and surf kayaking is no exception.

One of the most commonly seen problems with surf kayaking is a high wave capsizing the kayak.

The worst effect of capsizing (you being dumped on your head) can be avoided by wearing an adequate helmet.

If you are not practiced, never surf high waves. They increase the chance of capsizing and pulling you way out from the safe zone and more into the open water than you are comfortable with.

Hypothermia is another danger of surf kayaking. Unlike river and whitewater kayaking, surf kayaking happens quite a distance from the shore.

So if you fall out of the kayak and get separated from it, you will have a long way to go to reach the safety of the beach, or for someone to come and rescue you.

This increased time increases the chances of death by hypothermia. A smart way to avoid that is wearing a wet suit. Also, your kayak should have adequate floatation.

Otherwise, it might get absorbed by the waves and resurface much farther, increasing your fatigue as you try to reach it.

Even if you are an experienced swimmer, always wear a personal floatation device.

It can be prevented by developing a low brace, meaning that the peddler leans out to the sea, leveraging the flat blade of the paddle to avoid the kayak flipping over their heads.

Like any other kayaking, surf kayaking can be full of adrenaline rush and physical exertion.

And while it’s a good, healthy activity, overdoing anything can be harmful.

Also, surf kayaking might require more endurance and physical strength than whitewater kayaking, so make sure you never exhaust yourself when you are far away in the open seas.

Choosing the right surf kayak and right peddle are imperative if you want to have a successful surf kayaking trip.

But there are a lot of other important gears that you should have with you as well when you are out in the sea.

A helmet, bouncy aids, first aid kits, and drinking water are some of the things you should always have with you.

Dennis “Dakota” Johnson earned quite a reputation for rafting from Bismark, North Dakota, down the Missouri River to Okoboja, South Dakota. He spends more days outside than in, and has rafted or used a kayak in 19 states so far, with more on his list. From all these years of experience, he’s determined to teach you everything he can about rafting and kayaking, show you the best spots, and what gear you need for a successful trip. 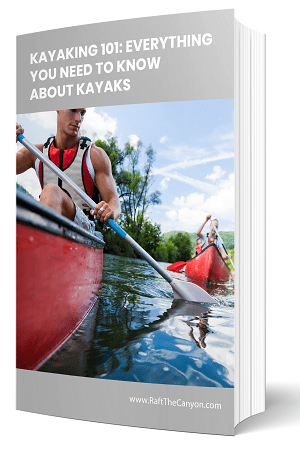 Download our FREE pdf guide and learn how kayaking works and start on the new adventure.

© 2020. All rights reserved. Raftthecanyon participates in the Amazon Services LLC Associates Program, an affiliate advertising program designed to provide a means for sites to earn advertising fees by advertising and linking to Amazon.com.